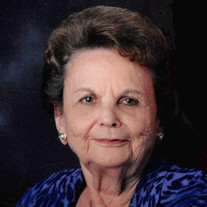 Anna Mary Hulsey, 91, was born on July 14, 1927 in the city of Fallon, Texas in Limestone County to her parents, Thomas and Bertha Mary Humphfus. Anna was the 3rd of 5 sisters. She lived in Fallon, TX until she moved to Galena Park, TX when she was a teenager. She attended Shilo rural school in Texas and received her GED. She then began her working career at Handy Dandy and Jacks Supermarket as a customer service clerk and giving food demonstrations. She was married to Billy Gene Hulsey for 69 years. They were united in marriage on July 4, 1948 in Liberty, Texas. She is preceded in death by her parents, Thomas Miles Humphfus and Bertha Mary Humphfus; husband, Billy Gene Hulsey; sisters, Virginia Eloise Vasey, Martha Helen Williams, and Rita Ruth Cotharn. She is survived by her daughter, Diana Black and son-in-law, Gary Black; grandson, Bryce Black and his wife Frances Black; great grandson, Beau Black and great-granddaughter Brooke Black; sister, Robbie Geraldine Beebe, and numerous nieces and nephews. Mrs. Hulsey had a very strong faith in God and in his word. She believed in the power of prayer. She had accepted the Lord as her savior and believed that she would spend eternal life in heaven. She was a member of Bandera Baptist Church, which became South Drive Baptist Church, for 69 years. She was also a Sunday School teacher for a number of years. Mrs. Hulsey shared a special friendship with her sisters, Virginia, Martha, Rita, and Robbie, along with her closest friends, Ivonne Black, Earlene Holt, Pat Castellaw and Mae Blackmon. She was a devoted wife, mother and grandmother. She was kind, warm, friendly, courageous, and spiritual. She enjoyed gardening, church socials, Scrabble, dominoes, entertaining family and friends, family vacations and "girl trips", and staying at the lake house in Point Blank on Lake Livingston. Her Celebration of Life Service will be held on Saturday, December 1, 2018 at 10:00 a.m. at South Drive Baptist Church with Pastor Kent Wilson officiating. Interment will immediately follow at San Jacinto Memorial Park in Houston, Texas.

Anna Mary Hulsey, 91, was born on July 14, 1927 in the city of Fallon, Texas in Limestone County to her parents, Thomas and Bertha Mary Humphfus. Anna was the 3rd of 5 sisters. She lived in Fallon, TX until she moved to Galena Park, TX when... View Obituary & Service Information

The family of Mrs. Anna Mary Hulsey created this Life Tributes page to make it easy to share your memories.

Send flowers to the Hulsey family.